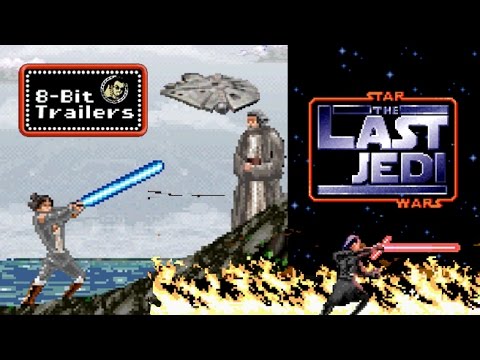 These days a trailer, just isn’t a trailer without the great 8-bit treatment.  Today the fine folks at JoBlo Videos have released an 8-Bit Star Wars The Last Jedi Trailer!  The video is simply fantastic, reminding fans of what it was like to play video games back in the late 80’s and early 90’s. You just have to watch it to appreciate the greatness that is within.

So check out the new 8-Bit version of the Star Wars: The Last Jedi trailer below!

Welcome to 8-Bit Trailers, where we take a kickass existing trailer and take it back in time to recreate it in glorious retro 8-Bit fashion. It’s as if your NES never went out of style! This time out, we head to a galaxy far, far away with the trailer for STAR WARS: THE LAST JEDI from director Rian Johnson and starring Daisy Ridley, Mark Hamill, Adam Driver, Carrie Fisher, Oscar Isaac, John Boyega and Benicio Del Toro!

Now Star Wars The Last Jedi director Rian Johnson has just given his official thumbs up for this video!