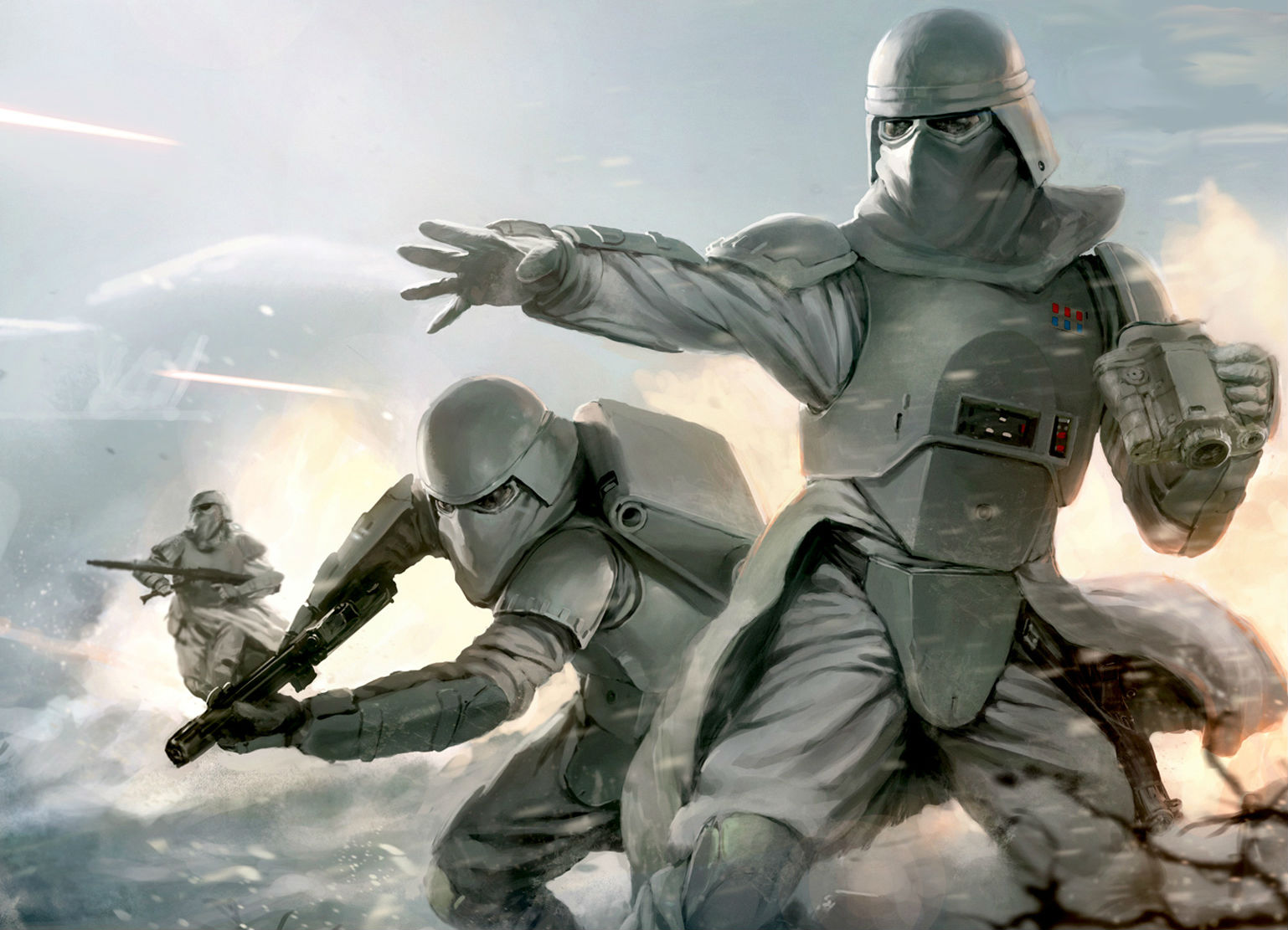 In part one of Inside the Stormtroopers we investigated why our subjects had such varying reputations. We concluded that their notoriety for inaccuracy as well as ineptitude was undeserved and that they were indeed a formidable force. In Part Two we’ll take a closer look at their armor and what it can tell us about how the Stormtroopers functioned as an institution.

Without a doubt the source of the Stormtroopers infamy is their iconic white armor. Whether it be the classic Stormtrooper seen on the first Death Star or the more intriguing scout trooper, something about their cold gaze is absolutely enthralling. How does this armor benefit them though? Why do they choose to wear it from head to toe especially when it seems to be completely useless against blasters? It must offer some benefits. One reason is that the armor effectively protects them from the elements. Stormtroopers, and their progenitors the Clone troopers, wore it in all sorts of environments from the hot sands of Tattooine, to the ceaseless rains of Kamino, from the noxious fumes and lava flows of Mustafar to the spore choked atmosphere of Felucia. Clearly having one uniform that is able to protect its wearer from these disparate environments is a huge advantage. Its even heavily suggested that their suits can withstand the vacuum of space considering they continue to wear their armor inside the Death Star and its hangar bays. Additionally it has long been established that their armor does protect against glancing blaster bolts. I would also hazard another conclusion; that the armor is impervious to kinetic based weapons. Consider that we never see anyone use any kinetic based weapons (i.e. guns with bullets) at any point in any film. This suggests that they would be useless against Stormtrooper armor. The Ewoks were able to take down troopers with primitive stone weapons but they don’t appear to have actually damaged the armor, just injured the men inside it. We should also remember that the Ewoks had been meticulously planning their ambush on the Stormtroopers for quite some time, as discussed in part one.

As for classes of armor the four generally accepted categories are standard Stormtroopers, Sandtroopers, Snowtroopers, and Scout troopers. The received wisdom for decades now has been that each one of these classes represents a different “branch” within the Stormtrooper corps. The standard Stormtroopers represent the main career track or assignment, Sandtroopers a second, and the Snowtroopers yet another. I would argue however that this is not the case. The Stormtrooper corps is needed all over the empire to fight in all environments. It doesn’t really make much sense to carry around detachments of standard Stormtroopers, Snowtroopers, and Sandtroopers everywhere you go especially on the limited space available for transport in the fleet. Were there two unused detachments of troopers in Vader’s fleet when he arrived on Hoth? Of course not. The Stormtrooper unit attached to him simply dawned their snow gear and invaded Hoth. The troops on Tattooine weren’t specialized Sandtroopers, they were just the troopers available in that particular situation (I doubt they even knew they would end up on Tattooine when they embarked, that’s just where they happened to chase down the princess). Their armor probably looked all dirty because they were wearing their field uniform as opposed to their garrison uniforms that they keep clean. Now, it is possible that there are divisions or legions that specialize in particular environments. Perhaps there are specialized arctic units, specialized arid units, etc. but each one is capable of deploying to any environment. The exception to this rule though would be the Scout troopers.

Whereas the standard Stormtroopers are outfitted with equipment for many different environs the Scout troopers are indeed a unique branch within the Stormtrooper corps. They likely provide, as their name implies, reconnaissance, indirect fire spotting, sniper capabilities, and asymmetric capability to Stormtrooper battalions. Rather than  being concentrated in whole Battalions, Brigades, or Legions, though, they are farmed out in company sized teams. A Stormtrooper battalion sized element likely has a scout trooper team assigned to it which can be utilized as necessary for various missions. This specialized role requires specialized training and likely represents a prestigious career track for Stormtrooper officers and NCO’s. I think it reasonable to assume that acceptance into the scout trooper ranks is highly competitive like British S.A.S. or American Green Berets. This begs the question though, how are the Stormtroopers organized as a whole?

I would argue that they fall under the umbrella of the Imperial Army as opposed to being their own branch of the military equal to the Army or Navy. They don’t seem to have support assets organic to their units but rather utilize the assets provided by the ‘big’ army. During the Battle of Hoth we see the troopers ride into battle in AT-ATs which appear to be piloted by standard imperial ‘pilots’. Yes their helmets resemble those of Stormtroopers, but so do the TIE pilots and they aren’t Stormtroopers. A safe conclusion would just be that whoever manufactures Imperial helmets likes to maintain a certain design motif. The exception to the vehicle rule though is the AT-ST. It would seem they are organic to Stormtrooper units and are used in a manner similar to a Bradley Fighting Vehicle or Stryker. They are an armored reconnaissance vehicle that can also engage in limited direct action. In addition to lacking organic heavy equipment they appear to be commanded by general officers from the Army. If they were their own branch distinct from the Army we would expect them to be commanded by Stormtrooper generals but they are not. We know they’re not because Stormtroopers wear black duty uniforms as evidenced in A New Hope, and General Veers wore a green duty uniform when commanding on Hoth. This makes sense of course since he is not just commanding Stormtroopers. He has transportation assets, he surely has orbital bombardment, close air support or artillery available, as well as logistics troops.

So how does the Stormtroopers Corps fit into the Army as a whole? The most logical explanation would simply be that they are simply the Infantry branch within the army. Though it has long been posited that the Imperial Army has a separate infantry branch there is no evidence of this. The Stormtroopers, and the Clone troopers who preceded them, are the only infantry force we ever witness fielded by either the Republic or the Empire. Therefore we must conclude that they are the sole infantry force within the empire.  They have their own officers and NCO’s who spend their entire career within the Stormtroopers (unless, of course, an officer attains flag rank in which case he assumes the standard olive drab of the regular army). Perhaps there is a special esprit de corps among the Stormtroopers who consider themselves separate and above the rest of the Army but they are none-the-less part and parcel of it.

In Part 3 we will examine the Stormtrooper Tactics and equipment and ask why exactly there armor is white. In so doing we may even see if perhaps they were not quite cut out to fight the Galactic Civil War.