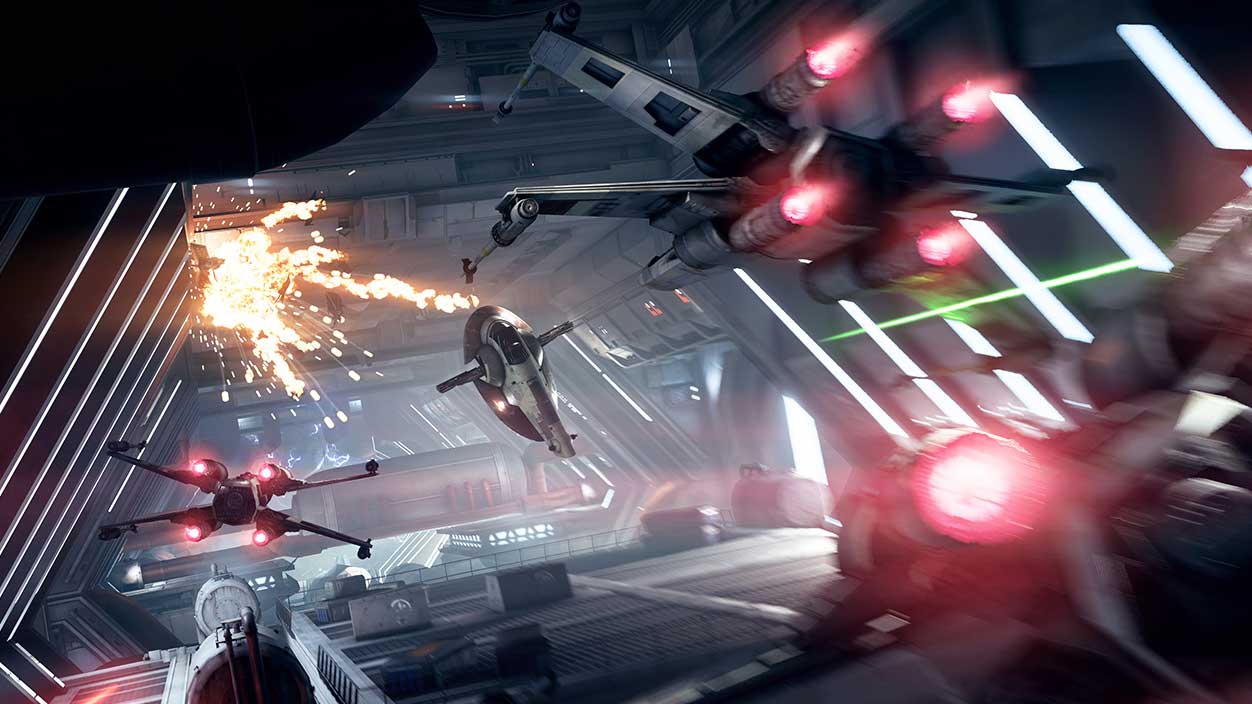 So, the Battlefront 2 Beta has ended now that the (delayed) deadline of October 11th has come and gone. As someone who was lucky enough to secure one of the randomly dispersed email codes for the closed alpha, I thought the game was solid. Of course, this is probably jaded by the fact I love the saga (duh). Hell, I played the original game despite its lackluster combat depth for over 100 hours. However, it’s one of the key new features of the game that’s really persuaded me to buy the sequel at launch instead of wait for a sale like I did the previous installment and that’s one of the plethora of new game-modes, Starfighter Assault.

Now don’t get me wrong, I really enjoyed the boots on the ground combat in the closed alpha and the vast improvements it’s made compared to the first game in terms of strategy, gameplay, classes and unlocks, but the slew of game releases over the last few years has left me a bit petered out on the whole FPS concept. It’s ridiculous fun, but I’m not yet ready to sink another hundred hours into another shooter. So, when I opened the game I was expecting to be entertained, but maybe be a little bit bored of the concept. As someone who hated the starfighter gameplay in the previous game, I was met with a pleasant surprise.

Starfighter Assault, despite not being the game’s “flagship” mode, and probably having the least content in the beta, easily made up most of the 8 hours of gameplay I got from the demo. Probably because I don’t play many flying games, the concept was unique enough to interest me much more than the ground combat. For those unaware, the beta version of Starfighter Assault sees a team play as the rebels attacking a Star Destroyer that’s under construction, first taking out two Imperial Cruisers, then flying into the cavernous scaffolding of the shipyard to blow up the shield generators in typical Star Wars fashion. The plucky group of 12 rebel players must then damage the clamps connecting the Star Destroyer to the shipyard to expose the reactor and deal damage to it, all the while being attacked by the enemy team of 12 playing as the Empire.

Sound design is on point, as is the visuals – just like in the last game. Unlike the previous installment though, the smattering of turrets placed all over the map and on the advancing rebel and Imperial cruisers adds even more realism to the experience, allowing you to shoot these larger ships out of the air with enough teamwork and proton torpedoes. Thanks to this, the maps feel so much more alive than the barren starfighter maps of the previous game, especially at launch where ships flew around, essentially, an empty sky only shooting at each other. The fact that I enjoy that there’s more things shooting might seem fickle, but it really does make everything feel more action packed, frenetic and complex.

The main reason I disliked starfighter combat in the previous game, especially when more detailed maps like that beautiful assault on a Star Destroyer in an asteroid field were added, though was the controls. It all felt very clunky. Trying to make precise movements with your ship was impossible since a brief move of the mouse or control stick caused your little fighter to continue to slide slightly afterwards. Furthermore, to stand any chance of hitting the fighter you were chasing, you had to keep the target in the middle of your screen for a few seconds to get a “lock on” and then shoot or bomb them. This is all meant you had to wait to take out enemies, making combat less fast paced and feel much slower and more boring. It also meant that it was fairly easy to take out enemies, making dogfights feel less rewarding and more trivial. Thankfully, the new game completely overhauls this control scheme. Now you just aim your reticle inside the circle near to your target and fire. The lock on system remains but now it’s only used for firing missiles. Controlling your starfighter, especially the snappy interceptors, feels great, removing the awkward sliding from the first game and replacing it with a tighter scheme that allows you to pull off precise movements. You’ll be needing these tight movements to be able to pull off dodges which are no longer assigned to the push of a button, further making you feel accomplished when you dodge that pursuing TIE’s torpedoes successfully.

Continuing this trend of overhauling the foundations laid by the previous game, the starfighter classes have also been expanded. Unlike boots on the ground combat there are only three, but each one has just enough different attributes to make it feel unique. The interceptors allow for fast, sharp maneuvers and feature powerful blasters at the cost of health and the bombers are able to dispense volleys of powerful proton torpedoes, ion blasts etc at the cost of being slow and a bit more unwieldy to pilot (though this never felt as uncontrollable as the original for me). Fighters offer a middle ground, having fairly powerful weapons and a respectable amount of health and maneuverability. Each class has their own strengths, but unlike the ground combat classes, I found myself happily switching between them. None of them, to my casual eye at least, felt particularly over or underpowered and they were all huge fun to control and experience. Each team has slightly different variants of these classes, replacing one or two abilities, like switching out the X-Wing’s health restoring astromech for the TIE’s speed boost. More variation would have been nice but the changes are enough to make each ship feel at least somewhat unique.

The map showcased in the beta is also fantastic, perfectly blending large open space for fast paced dogfighting with tight corridors and spaces to navigate and cover to duck behind. It begins with a nice open space to allow players to get to grips with controls without having to dodge around tight corridors and the space means players aren’t concentrated in one small area so there’s less incoming fire to avoid. Of course, you still have the Imperial cruisers to fly behind for cover should you so need it. The fight then transitions into a narrow corridor of scaffolding with obstacles littering the ceiling, floor and walls to avoid. This focuses the action down a small path, forcing you to engage in quick dogfights and bombing runs but you lack the space to make complex dodges (unless you want your little A-Wing to become a little ball of flames against the walls). Finally the fight moves to around the Star Destroyer. Thanks to the clamps overhead, you still have tight spaces to maneuver through and obstacles to avoid. Fighting is still focused around a small area so your skills are put to the test but now you have the added space to make larger dodges and evasions again, allowing you to flex your piloting muscles in the mode’s climax.

Overall, the brief snippet of the game-mode I’ve played so far has me converted. I used to think I would hate the starfighter combat of this game but now it’s shaping up to be the part I’m probably most excited to experience fully when it releases on November 17th 2017.