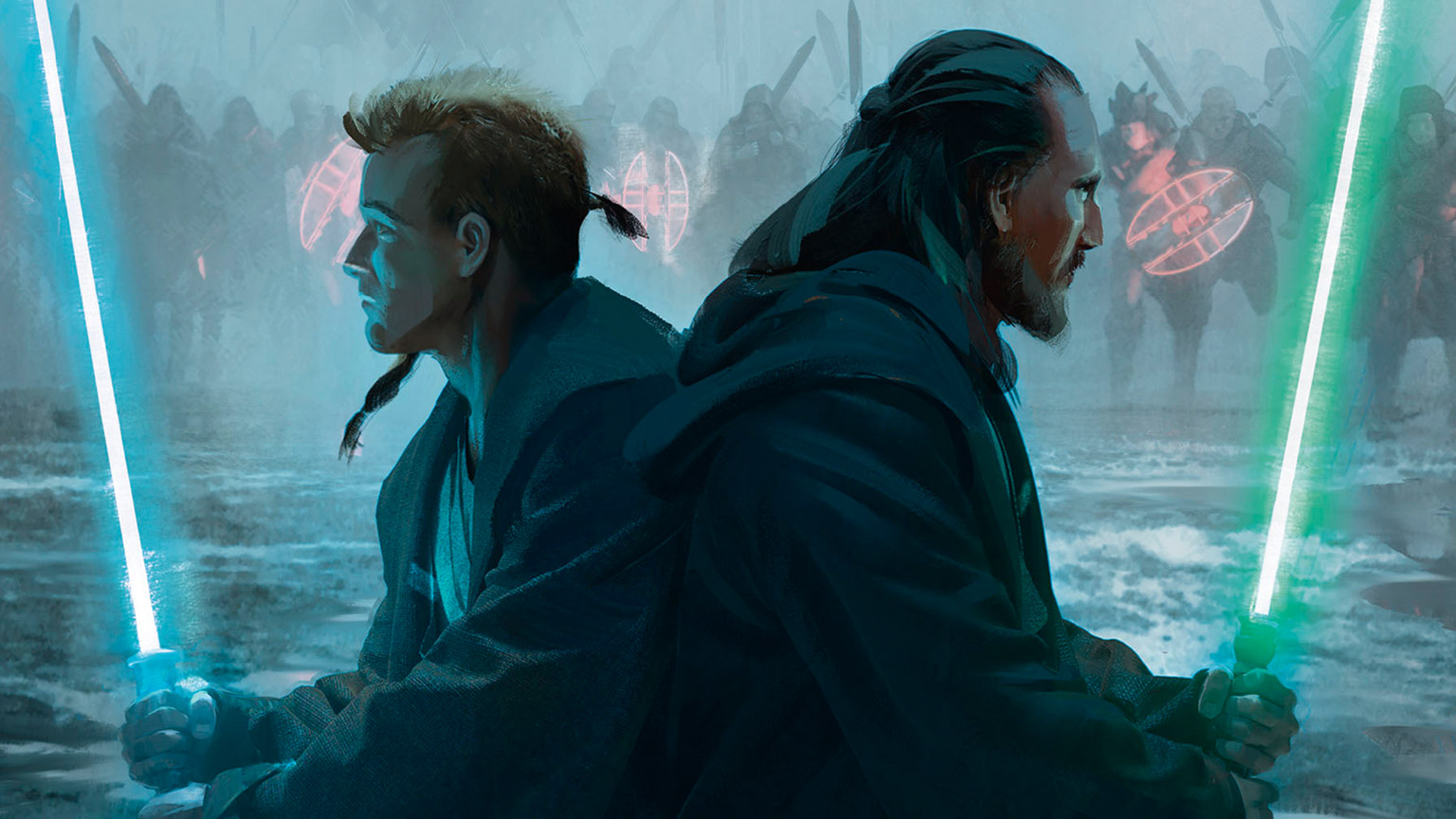 StarWars.com has revealed a second excerpt from Claudia Gray’s upcoming Star Wars: Master & Apprentice novel. We have embedded the excerpt below, but you can also take the source link at the bottom of the page to listen to an audio excerpt from the novel as well.

“I’m in pursuit!” Qui-Gon shouted into his comlink, hoping his voice would carry over the rush of air around his speeder bike as he swerved through jungle foliage. “Track me!”

His voice cracked on the last word. Great, he thought, but there was no time to dwell on anything except the chase.

He and Dooku were part of a Numidian Prime strike team, orga­nized to find the notorious bounty hunter Shenda Mol. She collected her bounties not by murdering individuals—which would’ve been bad enough—but by sabotaging passenger ships, detonating devices in crowded public areas, or once even releasing a deadly virus. Tens of thousands of deaths on fifty different planets were, for Mol, no more than collateral damage.

The Jedi had tracked her to Numidian Prime, where she had a small stronghold and a handful of followers. But the followers had all been apprehended now, and it was up to Qui-Gon and his Master to bring in Mol herself.

He gunned his speeder bike, trying to fly over the thick jungle un­derbrush but under the heavy palm leaves. Qui-Gon’s Padawan braid streamed behind him, and he wished he’d worn goggles to protect his stinging eyes.

No time for that. He crested the hill, which revealed the stony valley where they’d detected Mol’s hideout. Qui-Gon pulled back on speed, bringing his speeder bike to as quiet a stop as possible. From now on he’d travel on foot.

Numidian Prime could be a swampy, treacherous world, but Shenda Mol had hidden herself on high ground. Qui-Gon could walk silently on leaves and vines that were still soft and green. Other than a few birds circling overhead, no fauna seemed to be in the area. Keeping one hand on his lightsaber, he pulled out his scanner to make sure he was heading toward the right coordinates.

A few large, stony hills provided the likeliest place for Mol’s hide­out. Qui-Gon paused at the foot of one of them to put away his scan­ner and prepare for an altercation. Dooku would be along any moment now, but there was no guaranteeing his target wouldn’t be—

“Don’t move,” said Shenda Mol. She leaned against a rock forma­tion a few meters up the hill, and pointed her blaster at his head.

Qui-Gon went still. His hand remained on his lightsaber; against an ordinary opponent, he would’ve trusted himself to pull his weapon in time to block blasterfire. But this was Shenda Mol. She was a Falleen, with ultra-fast reptilian reflexes—and even among the Falleen, her reputation as a sharpshooter was unparalleled.

“Tell me something,” he said, remaining motionless. “I’ve always heard you had perfect aim—”

“You heard right.” She tossed her head; her long black ponytail fell across her green shoulder. “If you doubt it, make a move and find out.”

Qui-Gon had no intention of making a move . . . yet. “If you can target any individual from a tremendous distance, why do you resort to bombs or viruses? Why do you kill thousands when you could kill only one?”

Mol smiled. “I have a little game I play. I need more kills to win—though, of course, I’m only competing with myself. That’s the only competition that really matters, you know. More people ought to un­derstand that.”

Dooku would be along at any moment, he reminded himself. Mas­ter Dooku would’ve been tracking his speeder bike. All Qui-Gon needed to do was stall Mol for a brief time.

“You’re one of the trainees, aren’t you?” She cocked her head, study­ing him. “Not much of a catch. The kind I’d usually throw back.”

Qui-Gon didn’t like being called a “trainee,” but that was the least of his problems. “I’m not yet a full Jedi, no.”

“I knew that,” Mol said. “I’ve eaten cheese older than you.”

“Fourteen.” She hissed, as the Falleen sometimes did when they were amused. He thought it best not to respond to that.

Mol slid over a few rocks—practically slithered—while keeping the blaster at the ready. Qui-Gon felt sure her aim hadn’t wavered for a moment. Now she was a full meter closer to him.

“The smartest thing to do would be to turn around and leave,” Qui-Gon said. “Of course, that’s what I want you to do, but it happens to be true. Others are coming. The sooner you leave, the more chances you’ll have to lose them.”

“When you’ll just hunt me down again.”

This, too, was true.

Mol narrowed her eyes. “Shall I tell you of my little game, trainee?”

“It sounds like you’re going to,” Qui-Gon replied evenly. His palm was becoming sweaty against the hilt of his lightsaber.

“It goes like this. I’m trying to kill one target of every age. At least up to two hundred—I can’t go chasing ancients all the time. But I want all two hundred years represented. So far my oldest was a Whiphid who was one hundred and sixty-two. My youngest was four days. I count her as zero.”

Mol said it all proudly. It turned Qui-Gon’s stomach.

“Here’s the thing.” Her grin widened. “I’ve killed a thirteen-year-old and a fifteen-year-old. But that leaves me with a little gap. A gap you’d fill perfectly.”

She’s going to kill me. Qui-Gon’s hand tightened on his lightsaber—he’d just have to try to block her, even if it was futile—

A flash of light exploded from the jungle, striking Shenda Mol. She screamed in agony, dropping her blaster and tumbling down the hill­side to fall to the ground. Qui-Gon could no longer see her—thick undergrowth blocked his view—but he could hear a strangled gur­gling coming from her throat. Scratching against the dirt, as though she were clawing or kicking at the ground. Before Qui-Gon could ask what that light had been, the foliage rustled to reveal Master Dooku.

“You kill the helpless and brag of it,” Dooku said, walking past Qui-Gon into the underbrush, focused only on Mol. Although Qui-Gon wanted to see his Master, to show himself, he knew better than to interject himself into an encounter Dooku had well in hand. “You think to murder my Padawan merely to fulfill your pitiful ambitions. You find yourself impressive, do you? You know nothing of true power!”

Brilliant light flashed again, and again. Qui-Gon still couldn’t see it directly, though he could feel his skin prickling and his hair standing on end. The air tasted of ozone.

None of that seemed to matter, not when he could hear Mol’s wretched shrieks of pain.

Then Shenda Mol’s cries choked off. For one instant Qui-Gon thought she was dead—but then he heard her moaning brokenly. The sound wrenched him into action.

“Master, stop.” He pushed his way through the underbrush to stand between Dooku and Mol. The assassin lay at his Master’s feet, curled in on herself, trembling. “Please. I’m all right. We’re taking her into custody. It’s over.”

Dooku’s expression was unreadable at first, but slowly he lowered his hand. “It’s over,” his Master repeated. Suddenly he seemed almost normal again. “You’re all right, my Padawan?”

“Yes, Master.” Every other time Dooku had saved his life, Qui-Gon had thanked him. He couldn’t now.

What had his Master done?

“Let me summon the others.” Dooku stepped away to speak into his communicator, while Qui-Gon remained there, “guarding” Shenda Mol as she shivered on the ground.

You can currently pre-order Star Wars: Master & Apprentice from Amazon, for an April 16th release date.