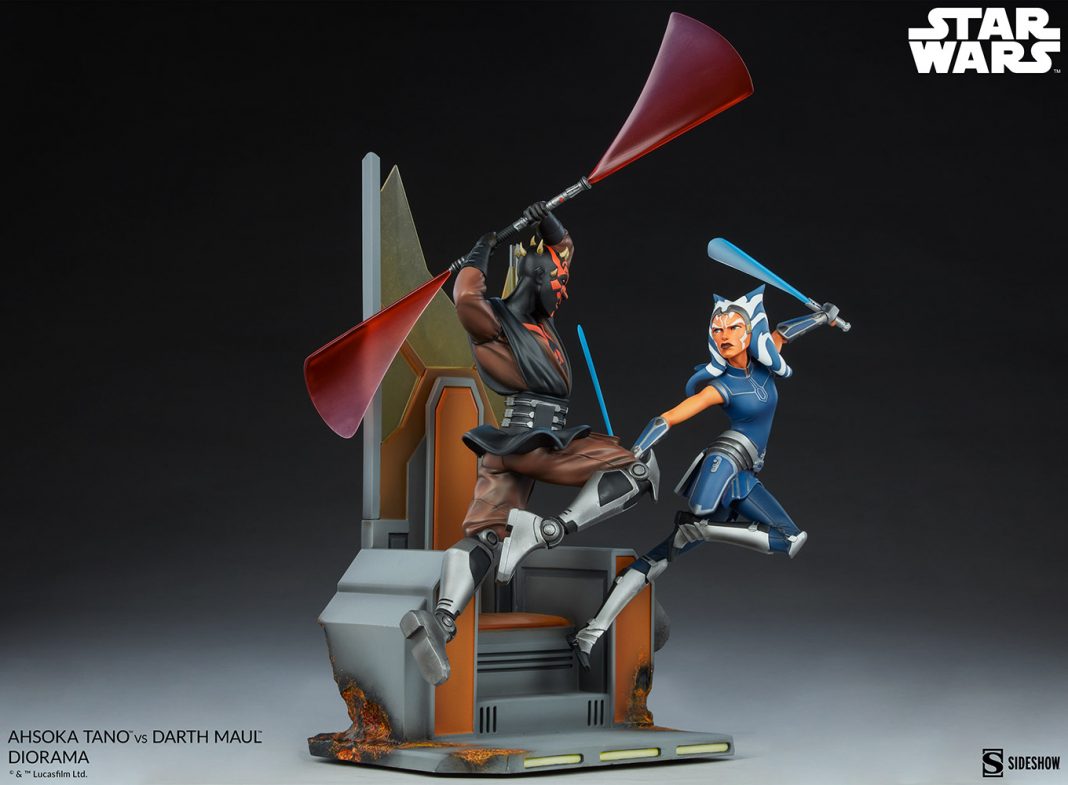 Sideshow presents the Ahsoka Tano™ vs Darth Maul™ Diorama, a dramatic new Star Wars™ collectible spotlighting an iconic lightsaber duel between two fan-favorite characters. The new diorama will set you back $595 USD and will ship in Q4 of this year. It is a limited edition piece, but numbers have not been released yet.

Inspired by their fateful confrontation in Star Wars: The Clone Wars™, the Ahsoka Tano vs Darth Maul Diorama measures 20” tall and 14.55” wide, set against a Mandalore™ throne room environment base. Shattered windows and scorch marks on the throne set the scene of a high-octane battle in progress, as the ex-Padawan™ and former Sith™ go toe to toe in a graceful, skillful clash of Force-wielding ideals and lightsaber blades.

The polystone Ahsoka Tano vs Darth Maul Diorama features two fully sculpted figures with detailed costumes and paint application based on their animated appearances. Darth Maul’s design includes his signature black and red Zabrak™ markings, a horned portrait, a black and brown bodysuit, and cybernetic legs. As a Togruta™, Ahsoka Tano has an orange complexion with white facial markings, her white and blue montrals™ and lekku™, and she wears a blue costume with silver armor accents. The duo’s unique lightsaber blades are sculpted with a sweeping visual effect to give the impression of active movement as they duel their way through the Mandalorian™ chamber. Packed with power and personality, this Star Wars diorama is a must-have centerpiece for any fan’s shelf.