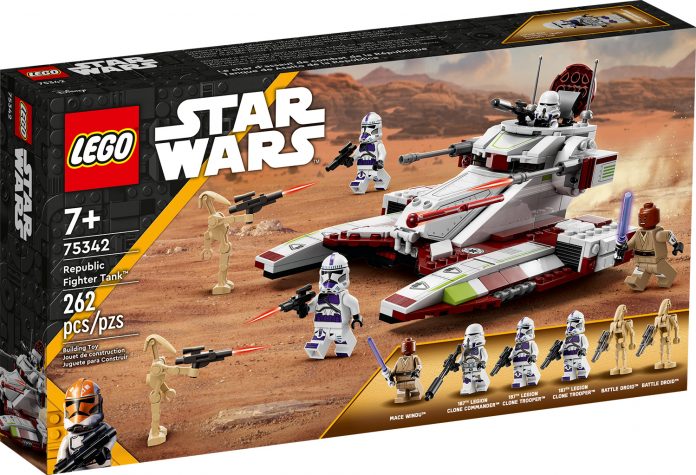 LEGO has unveiled their new Republic Fighter Tank set 75342. This one clocks in at 262 pieces and gives us our first minifigure for the 187th Legion Clone Commander. This one will set you back $39.99 and is available for pre-order now, at the normal sites.

Star Wars: The Clone Wars fans can play out exciting clashes between Mace Windu’s 187th Legion Clone Troopers and the Battle Droids with this LEGO® brick-built Republic Fighter Tank (75342). It features hidden wheels for a hover effect, 2 elevating spring-loaded shooters and a lookout for the Clone Commander on top. There are 4 LEGO minifigures in the set: Mace Windu and new-for-May-2022 versions of the 187th Legion Clone Commander and Troopers, plus 2 Battle Droids – all with cool weapons.

Gift idea for kids aged 7 and up
Thinking of buying this awesome building toy as a gift for a Star Wars™ fan who is new to LEGO sets? No worries – step-by-step instructions are included to guide their fun, creative journey.

Galaxy of choice
The LEGO Group has been recreating iconic starships, vehicles, locations and characters from the Star Wars universe since 1999. LEGO Star Wars has become its most successful theme with a wide variety of buildable models to excite people of all ages.