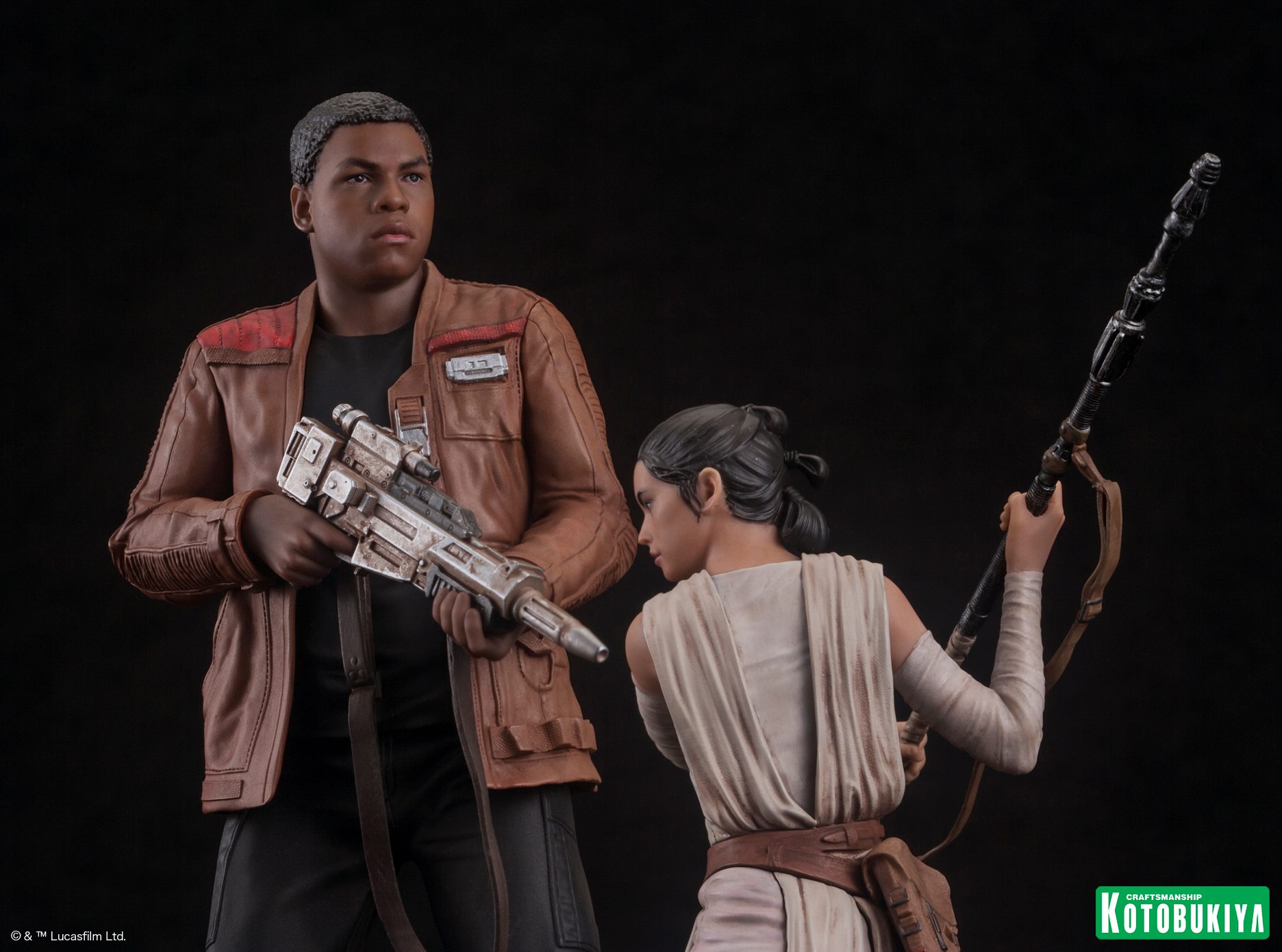 The Rey Statue includes her staff, while Finn includes a blaster rifle. Both Rey and Finn will have swap out parts that will let you display them with Anakin’s original lightsaber. The 2-pack will be released in July of 2017.

Check out the official images and solicitation information below.

A KOTOBUKIYA Japanese import! Star Wars ARTFX+ Statues bring you all of the quality and detailing that you expect from an ARTFX release in a great smaller scale perfect for collecting! Kotobukiya has brought you a range of characters from Star Wars Episode VII: The Force Awakens with an emphasis on the Dark Side and the First Order, but now the Resistance is bolstered by a tremendous new two pack featuring the film’s newest generation of heroes: REY AND FINN! Before Kylo Ren followed Poe Dameron to Jakku Finn was a loyal stormtrooper designated FN-2187. But after witnessing the atrocities the First Order inflicted on innocent villagers he escaped with the Resistance pilot and joined the side of good. Reluctant at first, Finn became a true hero during the attack on the Starkiller Base, even facing down Kylo Ren in one-on-one combat. Rey, meanwhile, grew up on Jakku barely subsisting on rations procured through the scavenger trade. A chance meeting with BB-8 propelled the girl into galaxy-changing events and through piloting the Millennium Falcon and escaping from the First Order’s clutches she would discover and explore her burgeoning Force abilities.

Both are making their ARTFX+ debuts in this dynamic set that captures the characters in their most iconic Force Awakens appearances: Rey wears her billowy scavenger outfit with loose-fitting clothing and wraps while Finn covers his dusty black shirt and trousers with Poe Dameron’s signature brown jacket with red and silver accents. They both come ready for action as Finn wields the blaster given to him by Han Solo and Rey stands on guard with her staff. But that’s not all. These highly detailed 1/10th scale figures even come with interchangeable arm and weapon parts so that either one can wield Luke Skywalker’s blue lightsaber!Both Rey and Finn have magnets in their feet for extra stability on their included metal display bases. These fun-to-assemble, pre-painted snap-fit kits can be put together easily in seconds without glue or modeling skill, and are perfect for a wide range of Star Wars fans. Join the Resistance with Finn and Rey and add them to your Force Awakens ARTFX+ collection from Kotobukiya!

Other Star Wars Statues in this line include: