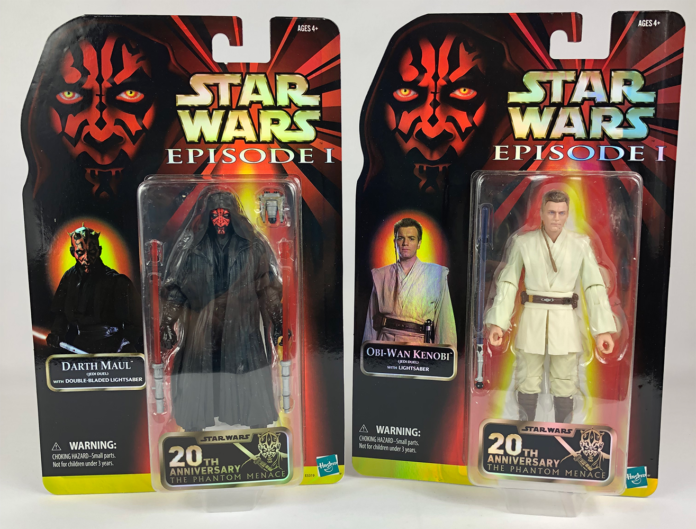 With the first people being let in the doors of Star Wars Celebration Chicago now, and ORN not being able to attend, the kind folks over at Hasbro have sent over review samples of their Celebration Chicago 2019 Exclusive Star Wars: The Black Series 6″ Darth Maul and Obi-Wan Kenobi figures!

The new figures feature package reminiscent of the original Hasbro Star Wars: The Phantom Menace packaging, with a slight twist. The packaging on these figures feature some sort of holographic application, that really makes the cards pop!

Since this is the 20th anniversary (man, I can’t believe it has already been that long) of Star Wars: The Phantom Menace, Hasbro decided to give fans something truly unique and special with these two releases. If you are attending Star Wars Celebration Chicago, and you were lucky enough to snag a lottery ticket to purchase one, you can find these at the Hasbro booth.

Check out our initial figures of the carded figures below!

Along with his master, QUI-GON JINN and QUEEN PADME AMIDALA, OBI-WAN KENOBI hopes to defend the planet of Naboo from invasion by the Trade Federation. As the battle rages between the Federation and the Gungan Grand Army on Naboo, young OBI-WAN finds himself locked in a vicious Lightsaber duel with the lethal Sith Lord, DARTH MAUL. Fans can imagine this moment and others from the STAR WARS galaxy with this premium OBI-WAN KENOBI action figure. Celebrate the 20th anniversary of STAR WARS: EPISODE I THE PHANTOM MENACE with this STAR WARS: THE BLACK SERIES 6-inch-scale DUEL OF THE FATES OBI-WAN KENOBI action figure. Featuring detailed movie-inspired design, articulated limbs, and Lightsaber accessory, OBI-WAN is ready for an epic clash against the dark side of the Force. Includes figure, Lightsaber, and alternate hands. Available at Star Wars Celebration and other conventions, and online after the convention in the relevant market.

A red-skinned Dathomirian Zabrak, the Sith Lord DARTH MAUL is known across the galaxy for his ruthlessness in battle and his double-bladed Lightsaber. In STAR WARS: EPISODE I THE PHANTOM MENACE, DARTH MAUL battles with Jedi Master, QUI-GON JINN and his apprentice, OBI-WAN KENOBI, on the planets of Tatooine and Naboo. Fans and collectors can imagine these epic duels with this 20th anniversary edition DUEL OF THE FATES DARTH MAUL action figure. Celebrate the 20th anniversary of STAR WARS: EPISODE I THE PHANTOM MENACE with this STAR WARS: THE BLACK SERIES 6-inch-scale DUEL OF THE FATES DARTH MAUL action figure. Featuring detailed, movie-inspired design, articulated limbs, double-bladed Lightsaber, and an additional accessory, the fearsome DARTH MAUL stands ready to clash with his Jedi foes. Includes figure, alternate head, accessory, and Lightsaber. Available at Star Wars Celebration and other conventions, and online after the convention in the relevant market.

Again, we can’t thank the fine folks at Hasbro enough, for this great review copy