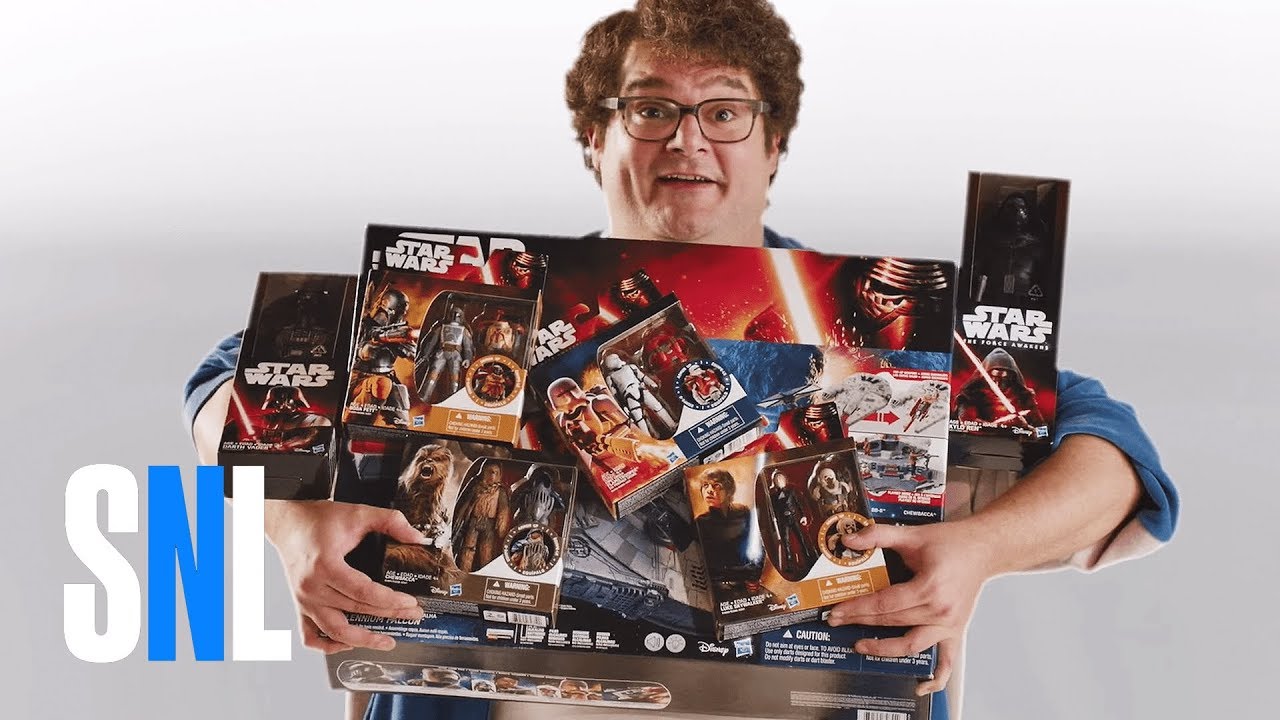 If you are like me, and you love both Saturday Night Live and Star Wars, then you have come to the right place! Like Star Wars, Saturday Night Live is also seen by many as a pop culture tour de force. The show has been around since the early 70’s and still commands viewing from even the most important people in the world.

When it comes to Star Wars, SNL has taken its fair shots at the beloved franchise over the years. In fact some of the SNL cast over the years (looking at you Bobby Moynihan) have professed their love of the Star Wars franchise. They have contributed to some of the skits not only with their amazing acting talents, but with props from their own personal collections!

We have put together this list (in order of appearance) of each time Star Wars got its own skit on the show. We have purposely left off skits in which Star Wars was just briefly mentioned, like Natalie Portman’s rap. There is also the classic Bill Murray skit from the late 70’s in which he plays a bar singer, but unfortunately we couldn’t find that one online.

With that said, enjoy the videos below!

In 1997 SNL created a new skit based on the extreme collectible hype surrounding Star Wars. Will Ferrell, Chris Kattan, and Jim Breur played hosts on a QVC type shopping channel selling lots of Star Wars merchandise. One particular collectible was a one of a kind, selling for $80,000. Check out the video to see what that particular item was…

In 1999 before the release of Star Wars: The Phantom Menace, Tim Meadows played Billy Dee Williams in a segment on Weekend Update (hosted by Colin Quinn) to talk about the upcoming film. Billy Dee seems to be a little jaded by the fact that he wasn’t included in the prequel.

Sometimes, shorts don’t make the final show, even though they are filmed. These are typically cut for time and no other reason. That is the case with the short below. In 2001, guest host Charlie Sheen joined Chris Kattan and Will Ferrell as loyal Imperial soldiers on a “casual Friday” on the Death Star. As you may have guessed, hilarity ensues.

In 2014, right after the first teaser was shown for Star Wars: The Force Awakens in November, SNL released their teaser version of what the new movie might be like. The video featured Han Solo (Taran Killam), Chewbacca, Lando Calrissian (Kenan Thompson), Princess Leia (Bobby Moynihan) and Luke Skywalker (James Franco), in a hilarious take on Star Wars and old age.

Days before the release of Star Wars: The Force Awakens, SNL released a new skit that pokes a little fun at the Star Wars collector. The skit featured Bobby Moynihan, Taran Killam and Kyle Mooney as Star Wars collectors in a fake Star Wars toy commercial. The trio have trouble understanding why kids are playing with and enjoying the new toys, when they could just keep them in the box for future value.

Another short from SNL in 2015 featured Daisy Ridley and J.J. Abrams. The skit focused on the auditions for Star Wars: The Force Awakens. Typically in these audition type skits we get some great impressions from some of the cast, and this one did not fail! The skit featured Daisy Ridley Cecily Strong, John Boyega, Emma Stone, Taran Killam, Kate McKinnon, Jon Hamm and more.

In 2016, perhaps the most popular Star Wars Saturday Night Live skit made its debut. In fact it has become so popular that you can’t go to a Star Wars Celebration convention since then, without seeing someone cosplaying as Matt the Radar Technician.

The skit is based on the hit show Undercover Boss with Kylo Ren (played by Adam Driver) watching how day-to-day work plays out on Starkiller Base. Interesting fact, Lucasfilm actually sent over the film used Kylo Ren costume from Star Wars: The Force Awakens for Adam Driver to wear in the skit.

A few months before the release of Solo: A Star Wars Story, SNL created yet another Star Wars spoof. This time it was released online, because it was cut for time. The short featured an introduction by J.J. Abrams and gave us a look at a future Star Wars film, The Mos Eisley Five: A Star Wars Story. The skit featured Mikey Day, Kate McKinnon, Charles Barkley, Kenan Thompson and Pete Davidson.

Celebrating the release of Solo: A Star Wars Story, the SNL crew were back it again, this time employing none other than young Lando Calrissian himself, Donald Glover. The short features Glover, Kenan Thompson, Leslie Jones, Mikey Day, Heidi Gardner and Chris Redd, in which everyone gathers for Lando’s Black Human Summit in a hotel on Naboo.

Which one is your favorite? As you can see there have been plenty of Star Wars themed skits on Saturday Night Live over the years. Leave your thoughts on our social media channels, or in the comment section below!