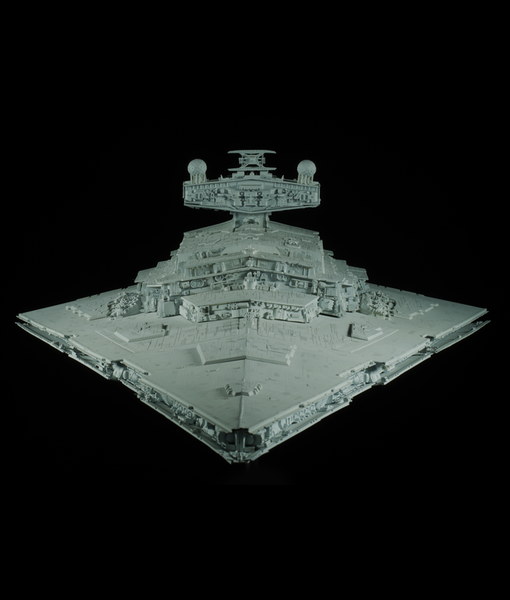 Hard core Star Wars collectors, get your wallets ready! EFX is set to deliver one of the most iconic ships in cinema history to collector’s doorsteps. The company is releasing a prop replica Star Wars: A New Hope Star Destroyer.

Keep in mind that this isn’t for every fan, unless you have an extra $16,000 laying around. This is a four foot filming miniature based on the designs for the first movie. Once you order it takes 3-6 months for the company to build and get to your doorstep.

Check out all the details and images below, and if you feel so inclined, order from EFX’s website.

EFX is proud to debut our new line of custom built, screen-accurate prop replicas for the ultimate Star Wars collectors! Our first offering in this exciting new line is the full scale, 1:1 replica of the Imperial Star Destroyer 4-foot filming miniature as seen in Star Wars: A New Hope.  In 1981 the name of this fearsome warship, The Devastator, was revealed in the NPR presentation of Star Wars: The Radio Dramas Special Edition.  A new 8-foot Star Destroyer (The Avenger) was made for Star Wars: The Empire Strikes Back, but the original 4-foot model was re-detailed and used in some scenes as well!

This Star Destroyer model is seen in the very first scene of the Star Wars saga! This Imperial cruiser is Darth Vader’s ship that intercepts Princess Leia’s Blockade Runner, the Tantive IV, en route to delivering the stolen plans of the Empire’s dreaded Death Star. Her “counselor” ship was disabled by heavy turbo fire and is drawn in by its tractor beam to the hangar bay in the underside of the ship.

The parts of the EFX Star Destroyer prop replica were developed with a thorough a review of the screen used prop with additional photos and measurement reference obtained in the Lucasfilm archives. EFX was able to identify and find most of the actual prop kit parts.

It is interesting to note that due to the tight budget and time restraints, only the port side and the bottom were fully completed since those were the only parts of the ship that were actually filmed. However, the starboard side was eventually redressed for Star Wars: The Empire Strikes Back.  To this day, the original studio prop has areas that are still not completed! With the help of the ILM Model Supervisor who actually worked on the model, we were able to complete the detailing of for the EFX replica!

These props will be available for pre-order in very small quantities per production run crafted in our model shop in the USA and not a mass production factory. Each prop is meticulously built and finished by hand. The prop is made with an aluminum and acrylic sub-structure with the detail parts cast in resin. Each detail piece is individually cast from a master made from the original prop kit part and then carefully finished and painted by hand.  Some original molds that were unable to be located, were 3D modeled from the examination of the actual prop, and then printed and cast in resin.

The lighting effects of this model are carefully included to illuminate the engines and launch bay as seen in Star Wars: A New Hope.

This incredible replica of the Studio Scale Star Destroyer, The Devastator, filming miniature will certainly be the centerpiece of your Star Wars collection!

Formed in 2007, EFX was quickly awarded by Lucas Licensing rights to design, develop, manufacture and distribute prop replicas and models encompassing the entire Star Wars universe. Since then they have added Marvel, Back to the Future and WB/DC Comics Suicide Squad.

Their dedicated team is passionate (and a little nuts), about collectibles. They work hard to deliver authentic, high quality, limited edition collectibles that let you relive the excitement you felt when watching your favorite heroes and villains engaging in heroic feats and dastardly deeds. Recapturing those moments is what they love to do, because in their hearts, they are collectors – exactly like you!