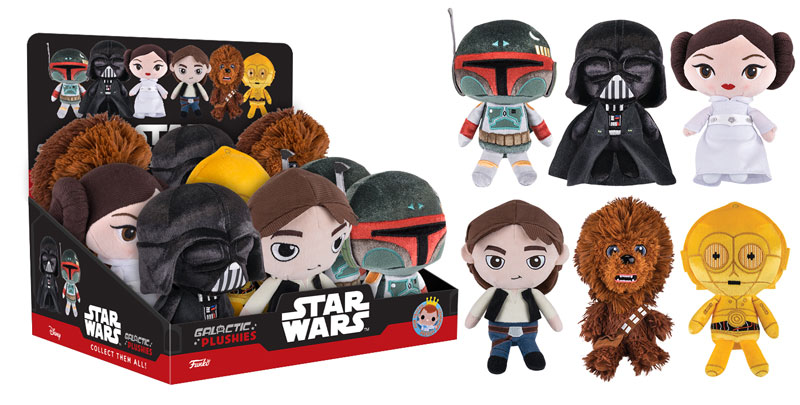 A couple of days ago we shared with you a first look at an upcoming Funko Wal-Mart Exclusive 3-pack of Pop vinyl figures.  Now Funko has officially released a look at that 3-pack, another new Wal-Mart exclusive 3-pack, and two boxes of Galactic Plushies!

Check out the information about the new Funko Star Wars items below.

These stylized plushies have come from a galaxy far, far away — introducing Galactic Plushies! Joining SuperCute and Hero Plushies, the first waves of these 7-8″ high-quality plushies feature favorite characters from Star Wars! Galactic Plushies are a must-have for any Star Wars fan! Collect them all today! This company really puts the fun in gift buying and giving! Whatever the occasion that drives you, these vinyl figures, bobble heads, and plush will be a big hit with everyone lucky enough to receive one… even if that everyone is you!

Funko provides the planet with terrific bobble heads and vinyl figures from a variety of genre and a number of licensed properties. Funko was founded in 1998 to bring back low-tech toys in the high-tech world of today, and the company’s first manufactured bobble head was of the restaurant advertising icon known as “Big Boy.” With the success of this initial creation, the extremely popular line of Wacky Wobblers was born. Funko has sold millions of its highly entertaining nodders and vinyl characters worldwide. Check them out for yourself and you’ll know why!