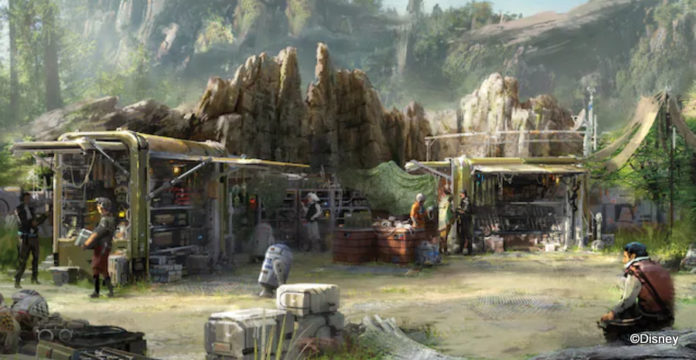 New information about Star Wars: Galaxy’s Edge that will make you scream with excitement! It appears that the park will be more immersive that anyone realizes. Galaxy’s Edge opens May 31 in Disneyland and August 29 in Disney’s Hollywood Studios, and has been described as the most immersive experience ever at a theme park. Little did we know, just how immersive it would be…

Disney has gone to great lengths to enhance the guest experience by creating personalized character interactions, and in Black Spire Outpost, cast members are called “citizens of Batuu” to really drive home that experience. In fact, Chairman of Disney parks and experiences, Bob Chapek, purports that guests will have “persistent interaction” that may not last just the length of one visit but is designed to follow guests from visit to visit.

Guest to the park will be interacting with just about anyone in the Star Wars universe who needs to stay out of the spotlight: smugglers, rogue agents, adventurers, and scoundrels! Executive Scott Trowbridge describes the land’s characters as “interesting people” with rich backstories that will come into play as they interact with guests.

“To the extent that we can, we’re avoiding the trope of the meet-and-greet and really leaning towards engaging with characters in a way that makes sense for the story you decided you want to have,” Trowbridge said.

Visitors might run into Vi the rebel spy near a full-size X-wing fighter docked in a hidden Resistance base camp just outside of the Black Spire village.

“If we were to see a Resistance spy, they might come up to us and say, ‘Will you help me? I have a friend I need to get to his ship. I need help making sure the First Order doesn’t know about it,’” Trowbridge said.

Or perhaps visitors might see Chewbacca along the rooftop of Ohnaka Transport Solutions, overlooking the docked Millennium Falcon.

“Maybe this friend is a giant, 8-foot-tall furry creature,” Trowbridge said. “It is more about engagement with characters and doing the things those characters would do versus a more static meet-and-greet experience.”

And you thought you were just going to have fun and enjoy the new Millennium Falcon ride? Well think again, your success or failure plays a big part in the interactivity in Galaxy’s Edge.

“There are places in the land that will respond to you,” Anderson said. “It will know you went on the Millennium Falcon and maybe you didn’t do so good. You go in the cantina and you order a drink and you know what, that bartender’s going to be like, ‘Oh, you might owe some credits to Hondo at this point.’ And all I’ve done is walk into the land, stand in a queue and ride a ride. And then suddenly the land starts getting you to engage.”

Imagineering has conducted in-park play tests to work out the logistics of the story-driven Galaxy’s Edge interactive experiences that will take place between theme park visitors and Star Wars characters in Galaxy’s Edge.

“We’ve tried to do our homework and set ourselves up for success,” Trowbridge said. “Ultimately we’ll find out. There’s still some things we won’t know until we fill the land with folks and see what resonates.”