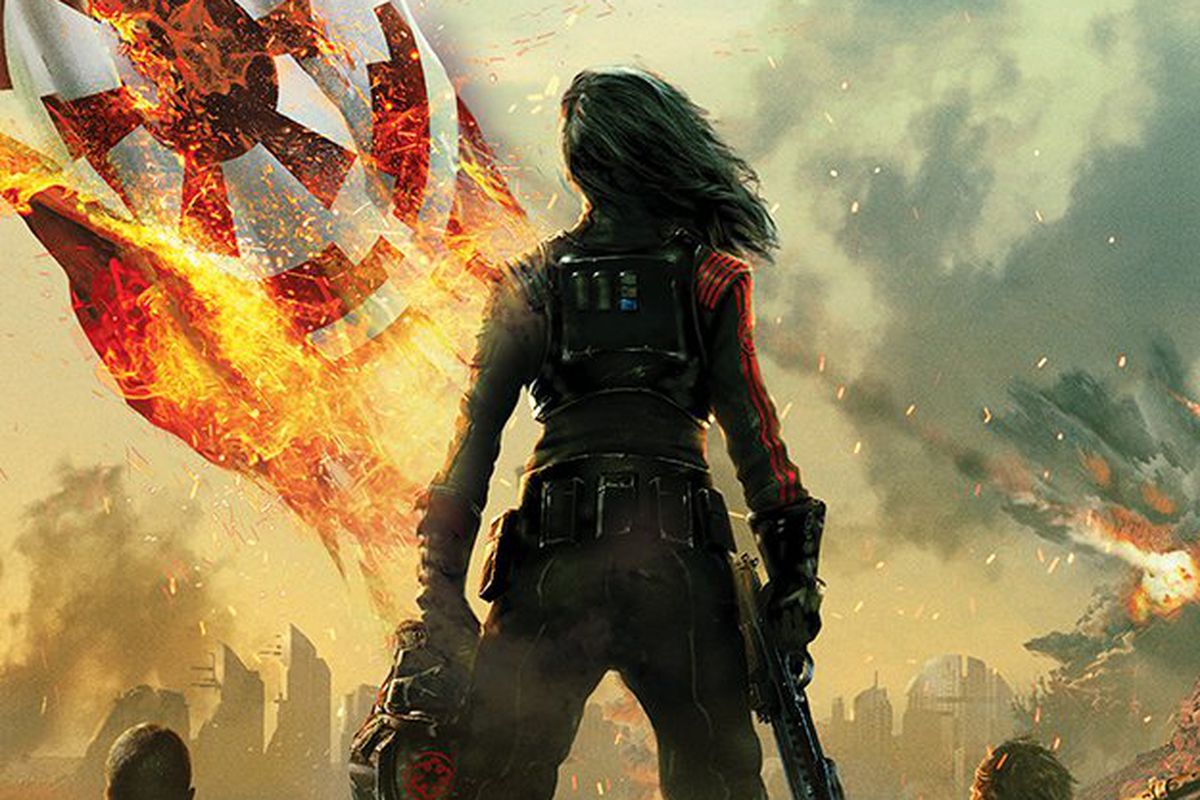 Thanks to the fine folks at USA Today, we have our first Inferno Squad Excerpt from the upcoming novel based on the game Star Wars Battlefront II.  The excerpt is straight from Chapter 1 of the book.

“Attention, pilots,” came the voice of her commander, Kela Neerik, in Iden’s ear, and for a brief, beautiful instant Iden thought her squad commander was going to explain what was going on. But all Neerik said was, “Death Star is now six minutes out from target.”

Iden bit her lip, wondering if she should speak up. Don’t. Don’t, she told herself, but the words had a life of their own. Before she realized it, out they had come.

“Respectfully, Commander, with only six minutes until the entire moon’s destruction, why are we out here? Surely thirty one-person ships won’t be able to do anything resembling damage to the Death Star in that amount of time.”

“Lieutenant Versio” — Neerik’s voice was as cold as space — “don’t assume your father’s position gives you special privileges. We are here because Lord Vader ordered us to be here. Perhaps you’d like to put your question to him personally when we return to the station? I’m sure he’d be delighted to explain his military strategy to you.”

Iden felt a cold knot in her stomach at the thought of a “personal” conversation with Lord Vader. She’d never met him, thankfully, but she had heard too many chilling rumors.

“No, Commander, that won’t be necessary.”

“I thought not. Do your duty, Lieutenant Versio.”

Iden frowned, then let it go. She did not need to understand the rebels; she needed only to destroy them.

She targeted the nearest X-wing and fired. Green lasers sliced through the enemy ship, and then only pieces and a flaring sheet of flame remained.

As if they sensed her renewed resolve, the rebel pilots suddenly upped their game. There was a brief flash at the corner of Iden’s vi­sion, and when she turned to look, she realized with sick surprise that this time the debris hurtling off in all directions was black.

Iden didn’t know who had just died. TIE fighters were so uniform as to be practically indistinguishable from one another. Their pilots weren’t supposed to think of their ships in the warm, fuzzy way the rebels were reported to do. A ship was a ship was a ship. And Iden understood that, as far as most in the Empire were concerned, a pilot was a pilot was a pilot: as expendable and interchangeable as the ships they flew.

We all serve at the pleasure of the Emperor, her father had drilled into her since she was old enough to comprehend what an emperor was. None of us is indispensable. Iden had certainly seen Imperial ships shot down before. This was war, and she was a soldier. But in­dispensable be damned.

The half smile she’d been wearing during most of the combat van­ished, and Iden pressed her lips together angrily. She veered, perhaps a touch too violently, to the right and targeted another X-wing. In mere seconds it exploded into a yellow-orange fireball.

“Gotcha, you—” she muttered.

Iden targeted the closest Y-wing, locked onto it, and blew it to pieces. Watching the fragments of the starfighter hurtling wildly was some small compensation for the deaths of her fellow pilots.

“Death Star is two minutes to target. Be aware of your distance from the planet.”

Ah, so that was why Neerik was giving the countdown. Iden had to give the pilot of a nearby Y-wing credit for courage, albeit of the foolish kind; the ship was now racing away from the Death Star at top speed. Were they heading back to Yavin’s moon, nobly choosing to die with their base, or were they just trying to evade her?

Not happening, Iden thought, and continued her pursuit. She got the vessel in her sights and fired. She didn’t slow as the ship exploded, but simply pulled back and looped up and over the fireball and de­bris, snug in her crash webbing, and smoothly dipped the TIE fighter in front of the Y-wing for the perfect shot.

The pale moon-shape of the Death Star loomed behind the vessel, its gargantuan size making the rebel ship look like the toys she’d been allowed to play with as a child. The Y-wing was making for Yavin as fast as it could, swerving erratically enough that Iden frowned as she tried to get a lock on it.

Temporarily blinded, Iden hurtled wildly, her TIE fighter tum­bling out of control. As her vision returned, she realized debris was coming at her as intensely as if she had suddenly materialized inside an asteroid field. Her focus, always powerful, narrowed to laserlike precision as she frantically dodged and swerved, maneuvering around the biggest pieces and wishing with all her being that TIE fighters had shields.

Iden pivoted and tumbled, breathing the mercifully still-flowing oxygen deeply and rhythmically. But she knew in her heart it was just a matter of time. There was too much debris, some of it the size of a standard escape pod, some of it as small as her clenched fist, and she was right in the thick of it. The smaller pieces were pelting her TIE fighter already. Sooner or later, one of the big chunks would hit her, and both Senior Lieutenant Iden Versio and her ship would be noth­ing more than smears on what was left of Yavin’s moon.

Somehow, she’d wandered too close to the Death Star’s target and had gotten swept up in the chaotic sweep of its destruction—exactly what her commander had been warning her against.

But how was that possible?

Set in the aftermath of Rogue One: A Star Wars Story, this action-packed prequel to the hotly anticipated videogame Battlefront II introduces the Empire’s elite force: Inferno Squad.

After the humiliating theft of the Death Star plans and the destruction of the battle station, the Empire is on the defensive. But not for long. In retaliation, the elite Imperial soldiers of Inferno Squad have been called in for the crucial mission of infiltrating and eliminating the Partisans—the rebel faction once led by notorious Republic freedom fighter Saw Gerrera.

Following the death of their leader, the Partisans have carried on his extremist legacy, determined to thwart the Empire—no matter the cost. Now Inferno Squad must prove its status as the best of the best and take down the Partisans from within. But the growing threat of being discovered in their enemy’s midst turns an already dangerous operation into a do-or-die acid test they dare not fail. To protect and preserve the Empire, to what lengths will Inferno Squad go . . . and how far beyond them?

The Rebellion may have heroes like Jyn Erso and Luke Skywalker. But the Empire has Inferno Squad.