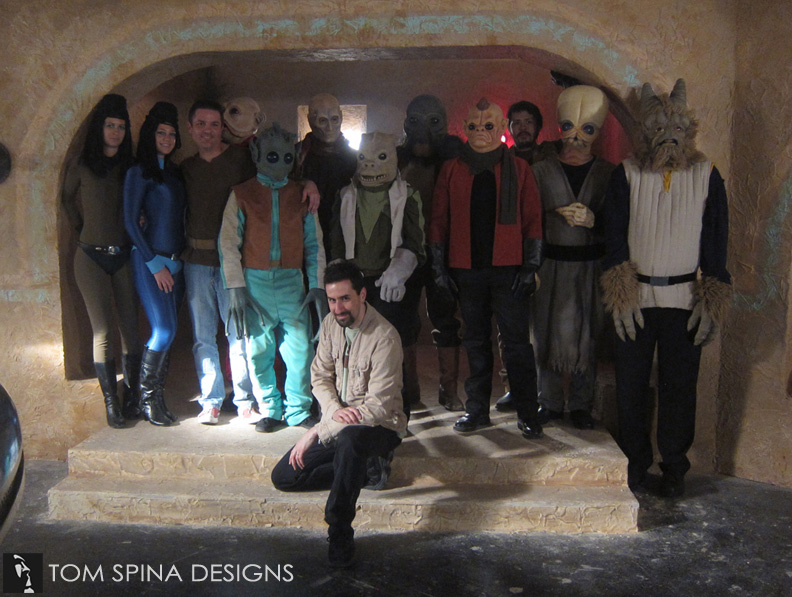 I can remember going to the store in the 1980’s and buying one of the very first models I ever built, which was the Empire Strikes Back X-Wing. Oh the memories. For the most part, at that point in my life I did not really know what I was doing, and at that age I’m sure the model did not “look” the best. To this day I still cherish those memories though.

Tom Spina at Tom Spina Designs creates amazing things. He and his highly specialized team not only creates memories, but they also actively work to keep the old ones alive as well. His company creates custom sculptures, mannequins, statues, busts, theme props, home theater art, furniture, foam latex mask restorations, and movie props displays. Tom and his team also actively restore many props and sculptures from the past, like An original latex alien mask and hands from Star Wars, A New Hope, 1977.

I recently talked with Mr. Spina to learn about his history with model building, his love for Star Wars, and the fantastic Millennium Falcon table that has been making its rounds on the Internet.

Pete Wadsworth: Mr. Spina I want to say I really admire all your work and also being a fellow model builder (of course not on your caliber).  Star Wars has really influenced my life, what are your biggest influences?

Tom Spina: That’s very kind of you and means a lot from a fellow builder.  I feel fortunate to do this professionally, though we all start as hobbyists and fans, don’t we?  Star Wars has been a huge influence for me as well.  The movie hit theaters when I was just old enough to really appreciate it and understand that it was a film, created by artists of all types making sets, models, and of course… monsters!

Other big influences early on were King Kong and The Wizard of Oz, and eventually Rick Baker’s work, some of which is famously in Star Wars too.  Jim Henson was perhaps the biggest influence, as the Muppet Show was quite big around the same time as Star Wars, and I think really imprinted itself on my brain. His boundless creativity and obvious passion for his work are things that are an influence every day.

Pete:  What about as a child, did you build models?  Did you always hold a interest to create?

Tom: I was always building stuff as a kid, usually monsters. Stop motion, puppets and rubber masks, all the time. I remember in grade school I made a Jabba the Hutt out of egg carton type foam padding. He was blue!  That was the color of the foam I had gotten and I was in grade school and couldn’t dye it!  We learn as we go and I went through a lot of trial and error.  Heavy on the error!  It was interesting childhood for sure and while my parents aren’t the most creative people in the world, they were (and are!) very supportive.  I do sometimes wonder what they must’ve thought about the mad scientist’s lab I’d turned their basement into!

Pete: You have worked for some of the biggest names out there like Lucasfilm and Disney, also you create pieces for countless others, what is your approach to a new project? Can you walk me through the steps?

Tom: Sure, though no two projects are alike here. We do quite a bit, from restoring and displaying original props and creatures used in various films (like Muftak from Star Wars, which we just recently restored, creating everything from creatures and costumes to statues over 20 feet tall.

But let’s walk through one of our Star Wars alien mask recreations. We start with research. Looking for every image we can for a character. When working with Lucasfilm on a licensee, we have the benefit of their image archives, though some characters were photographed more than others… some aliens were downright camera-shy and we’re always hoping some new image will show up with a clear shot!

From there, we do a full-scale sculpture. We’d scale the piece based on relative size to other aliens, or if we’re lucky, we may know where the original prop is and then we’d work with a few measurements to start us off.

That sculpture would be done by hand, usually in WED clay, a favorite around here. This can take anywhere from a few days to a few weeks. For a latex mask, that gets covered in UltraCal 30 (a type of plaster) to create a negative mold. Then the latex mask is cast from that mold.

We then try to match the paint style of the original props. That means some get stippled hand painting where others are airbrushed. We’d also start to work out any specifics. Greedo has unique eyes with fishnets inside them; Walrusman has those great tusks and hair.

Last step is to incorporate padding or Velcro for access and wearability (and of course, a few holes so the actor can breathe a bit!)

Pete: What do you and your company have in the works now, that you are excited about?

Tom: We just wrapped a new commercial for a Star Wars toy which should start airing soon. We’ve got a few AMAZING things going in the studio right now, but unfortunately, we can’t discuss those just yet! I wish I could! Please keep an eye on our social media pages for more about those as soon as we can share! We recently wrapped up some really cool stuff though. We did a number of Star Wars displays for a video game company’s office that were a ton of fun. Life-sized Vader, Sandtrooper, Boba Fett and more. We also just did a furniture piece for a private client’s home theater inspired by the asteroid field chase in ESB  What a great reaction we got from that one! I can’t believe how many people wrote us about it. It’s like our old Han Solo in Carbonite Desk all over again!

Pete: Are you looking forward to the new Star Wars material coming out, like the Force Awakens?

Tom: I sure am, although I’m trying to manage that excitement. I know a lot of my generation felt a bit let down by the prequels and I just hope the new films have a bit of that old-school magic about them. I’m hopeful and it’s exciting to think we’ve got 5 new Star Wars movies to look forward to already!

Pete: You have created pieces for May the 4th, that was incredible; will you be working for Lucafilm/Disney in the future?

Tom: We have a few things on the horizon, and naturally, I hope for much more! The May the 4th shoots were super fun. We got to work with our friend Ryan Brett Puckett who made the sets and three different production companies for that event and all had such passion for the material. I think that’s the coolest part about working on anything Star Wars. Everyone loves it so much. When you’re on set, the whole crew is just excited to be a part of it. Whether it’s a big commercial or a web video… whether you’re the writer, the creature crew or the caterer, everyone knows that just being there is something special.

Tom, it has been so much fun, talking with you, and gaining some insight into the incredible work that you and your company have done. The work that you continue to do is simply awe inspiring, and  not just for the Star Wars Community, but for all the art world and the Science Fiction Fantasy community as well. If anyone would like to order any custom furniture or even if you have a idea for your man cave, contact Tom and his Team at tomspinadesigns.com or visit their Facebook page.  They will surely not disappoint you.