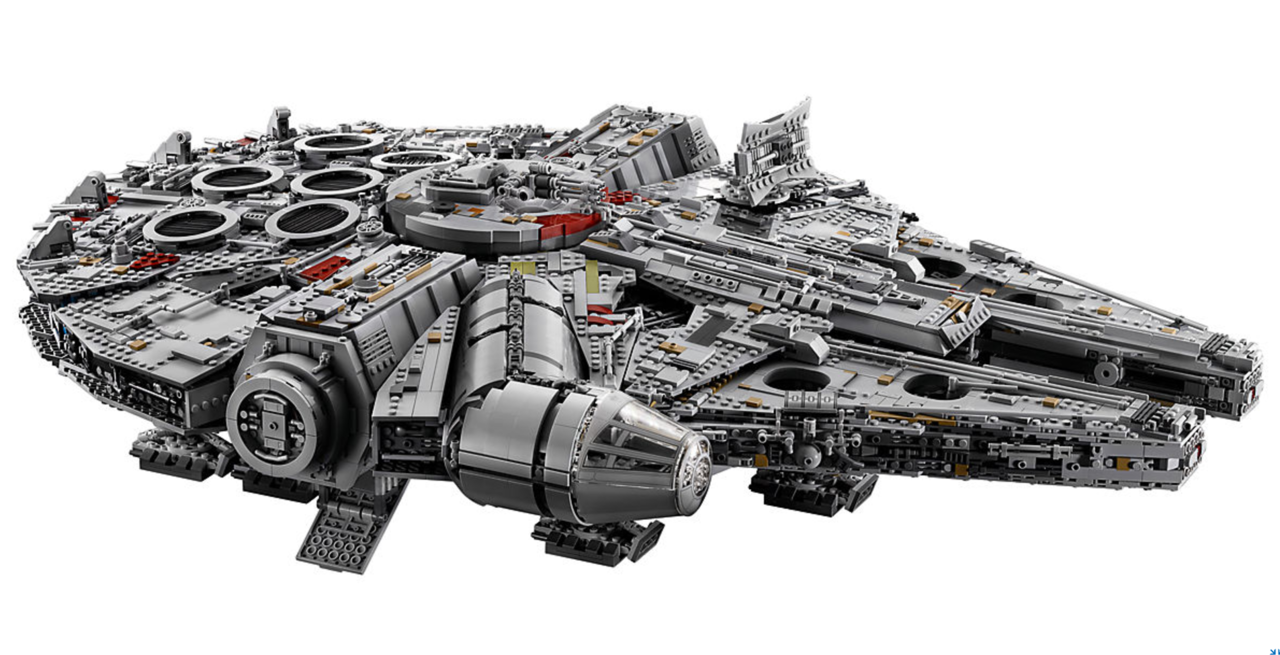 Welcome to the largest, most detailed LEGO® Star Wars Millennium Falcon model we’ve ever created—in fact, with over 7,500 pieces it is the biggest LEGO model ever sold! This amazing LEGO interpretation of Han Solo’s unforgettable Corellian freighter has all the details that Star Wars fans of any age could wish for, including intricate exterior detailing, upper and lower quad laser cannons, landing legs, lowering boarding ramp and a 4-minifigure cockpit with detachable canopy. Remove individual hull plates to reveal the highly detailed main hold, rear compartment and gunnery station. This amazing model also features interchangeable sensor dishes and crew, so you decide whether to play out classic LEGO Star Wars adventures with Han, Leia, Chewbacca and C-3PO, or enter the world of Episode VII and VIII with older Han, Rey, Finn and BB-8!

As shown in the images, the set will include minifigures from the Empire Strikes Back (Chewbacca, Leia, Han Solo and C3PO) and from the Force Awakens (Rey, TFA Han Solo, Finn and BB8). It will also include a brick built Mynock and two Porgs. To allow buyers to display the ship as it was in either TESB or TFA, the kit also includes a separate build for the rectangular radar dish from TFA which can be swapped with the circular one from TESB and features two builds to modify the craft’s mandibles to how they were seen in TFA.

Lego previously released a Millennium Falcon as part of their UCS line a few years ago but this one is much bigger, more detailed and complex, making use of new pieces and different techniques to create a model that looks even more impressive and realistic. Furthermore, it has parts of a detailed interior, as seen in the photos, unlike the previous release, which are accessible by removing parts of the roof structure and has enough space to comfortably seat the figures. These include the gun station, cockpit, part of the corridor seen in TESB, the seating area with holochess table and the room where Finn and Rey attempt to make repairs in TFA. It also features a working boarding ramp, 7 landing legs and concealed blaster cannon. If you want an even closer look at these intricate details on the model then the designer video for the set has also been released.

If the previous UCS incarnation of the iconic vehicle was anything to go by, once this set gets discontinued in 2 years, its price will skyrocket so those wanting to get this set will have to begin remortgaging now.